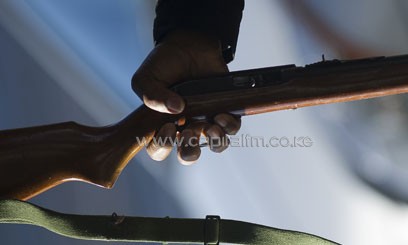 The rifle had been given to the boy last year and was kept in the corner of a room. The parents didn't realize a shell had been left in it/XINHUA-File
0
SHARES
ShareTweet

The rifle had been given to the boy last year and was kept in the corner of a room. The parents didn’t realize a shell had been left in it/XINHUA-File

CHICAGO, May 1 – A five-year-old boy who was playing with a .22 caliber rifle he’d been given as a gift accidentally shot and killed his little sister in their Kentucky home, officials said.

The shooting happened on Tuesday in rural Cumberland county and the two-year-old girl was rushed to a hospital where she was pronounced dead, the state police said.


Cumberland County Coroner Gary White identified the girl as Caroline Starks and said the children’s mother was cleaning the house at the time and had stepped outside onto the porch.

“She said no more than three minutes had went by and she actually heard the rifle go off. She ran back in and found the little girl,” White told WKYT news.

The rifle had been given to the boy last year and was kept in the corner of a room. The parents didn’t realize a shell had been left in it.

“It’s a Crickett,” he told the Lexington Herald-Leader. “It’s a little rifle for a kid. …The little boy’s used to shooting the little gun.”

An autopsy was set to be conducted on Wednesday, but White said he expects the shooting will be ruled accidental.

“Just one of those crazy accidents,” White said.

There were 851 deaths caused by accidental discharges of firearms in the United States in 2011, according to the latest data from the Centers for Disease Control and Prevention.

The United States has been embroiled in a heated debate over gun control and gun culture in the wake of a horrific December shooting at a school in Newtown, Connecticut that killed 26 young children and educators.

President Barack Obama has pushed for tougher federal gun laws to require universal background checks on gun buyers and called for a ban on assault weapons like the one used in Newtown.

But last month, his background check proposal – condemned by the powerful National Rifle Association as an infringement on Americans’ constitutional right “to keep and bear arms” – failed to muster the necessary 60 votes needed to clear the US Senate.

No efforts have been made to prevent children from using firearms for hunting and sporting purposes, a treasured tradition for many American families.

The Crickett is just one of many child-sized rifles on the market and is sold with the tag line ‘My First Rifle.’

It comes in a number of child-friendly barrel designs and colors, including hot pink for little girls. A host of accessories are also available, like story books and a gun-toting beanie baby of the rifle’s mascot, a cartoonish cricket.