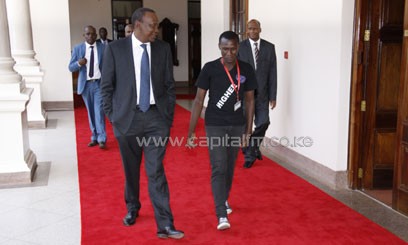 NAIROBI, Kenya, May 1 – Daniel Owira who was made famous by his National Drama Festival performance that had President Uhuru Kenyatta and his wife Margaret Kenyatta laughing out loud has had the rare second personal encounter with the Head of State.

Owira accompanied by his mother and sister Susan were invited to State House on Wednesday afternoon where the president awarded Owira with a full scholarship, all the way through to university.

“You are now one of my sons. Make sure you give me your report form every end of the term,” President Kenyatta said at the meeting on coming from the Labour Day celebrations held at the Uhuru Park grounds.

The President will also pay for Owira to board at Highway Secondary School where he is in his second year so he no longer has to walk to school daily from the Fuata Nyayo slum of South B.

The rest of Owira’s family will soon also have the opportunity to leave Fuata Nyayo after Kenyatta, considered the richest man in Kenya, promised to finance his mom’s business.

“My mother had a fish business which burnt to the ground so now she can have a fresh start,” Owira told Capital FM News.

Susan was not left out either and the single mother of one also stands to benefit from the President’s generosity, “I got pregnant when I was 15-years-old in the slum and now I have a seven-year-old daughter to care for.”

Susan was forced to work as a house help on completing her primary school after her father passed away, “I came from Kisumu to Nairobi looking for work so I could help my mom and step mom who sold samosas to support us. There are 11 of us and there just wasn’t enough money for school. Let alone for food.”

Susan currently works with teenage girls in the slum so they can avoid unplanned pregnancies and drug abuse.

“I had to pinch myself the first time I shook the President’s hand and now to talk and walk with him a second time I feel like the luckiest boy in the world,” Owira told Captial FM News over the phone just before he was taken on a personal tour of State House by none other than the President himself.