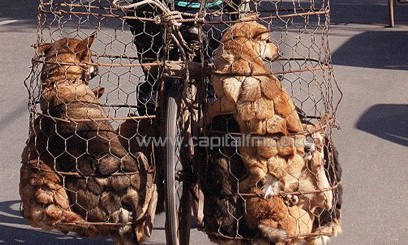 BANGKOK, May 6 – Around 1,300 dogs crammed into cages have been seized in less than a week in Thailand’s northeast border region, officials said Monday, amid concerns that the canines were destined for overseas dinner plates.

On Sunday, villagers in Sakon Nakhon told police “they heard sound of dogs whining and barking in scrubland”, according to local provincial police chief Polsak Banjongsiri.

“When we arrived, we found more than 400 dogs abandoned in about a hundred cages,” he told AFP.

“Some dogs are strays, some have been sold by their owners,” he said, adding that they were destined to be trafficked to neighbouring countries.

The rescued animals were taken to the already overcrowded Animal Quarantine Centre in nearby Nakhon Phanom province.

“This is a trans-national network to take them to neighbouring countries. Most of them are for people’s food – the meat trade – they would have been butchered,” said the centre’s head Chusak Pongpanich.

Dogs are an essential part of cuisine marking the end of the lunar month for older traditionalists in nearby Vietnam.

An increase in animal ownership in the communist nation has also seen growing ranks of thieves go from small town to small town in rural areas stealing pets to sell to dog meat restaurants.