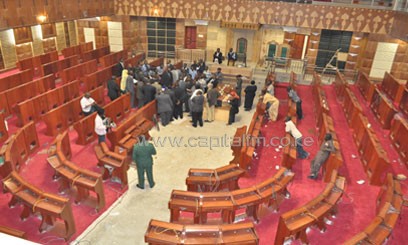 The budget also proposes Sh3.39 billion for the 350 MPs’ allowances and an additional Sh1.3 billion for their domestic and foreign travel/FILE
0
SHARES
ShareTweet

The financial estimates indicate that the Parliamentary Service Commission (PSC) has set aside Sh841.2 million as the total basic salaries for the MPs and the Speaker in the Government’s new financial year starting July 1.

Some Sh1.1 billion has been earmarked to cater for the 67 Senators’ salaries with Sh449 million being payment for their basic salaries and Sh663 million for allowances.

The SRC led by chairperson Sarah Serem had set the MPs’ pay at a more modest Sh532,000 as part of measures to curb the spiralling Government wage bill. After taxation, the MPs would have received Sh372,000.

This was lower than the Sh851,000 MPs in the now defunct Tenth Parliament were earning.

Sh4 billion has been set aside to fund the construction of office facilities which will include Sh1.2 billion for a new office block, Sh800 million for the refurbishment of the Senate chambers and other offices within Parliament Buildings.

In the current financial year the PSC budget stood at Sh15 billion with Sh12 billion set aside for recurrent expenditure and Sh2.2 billion earmarked for development.