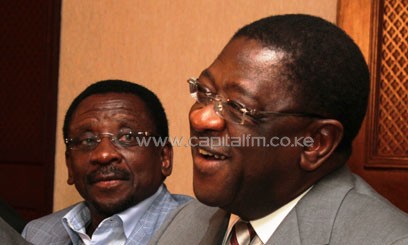 Family spokesman Musyoki Kivindyo told Capital FM News that the two units would both carry Kilonzo’s coffin, as requested, to bid farewell to their departed colleague/FILE

Family spokesman Musyoki Kivindyo told Capital FM News that the two units would both carry Kilonzo’s coffin, as requested, to bid farewell to their departed colleague.

“The Senior Counsel and the Senators will play a role. One group could carry the body to the Church service and then the other will handle the burial site so there will be coordination,” he said.

Members of the Senate had on Tuesday evening paid glowing tribute to the late Kilonzo, lauding the legislative reforms he spearheaded as the Justice Minister in the 10th Parliament.

The Senators, who were led by Speaker Ekwe Ethuro to his Rosslyn home, said his works would not be forgotten adding that they had set up a committee to help the family with burial arrangements.

“We will be there for the Church service and for the funeral where we will play a very active role. We just want to say pole sana,” said Ethuro.

LSK Chief Executive Officer Apollo Mboya said the Senior Counsel had agreed on a strict dress code at the requiem mass adding that they would purchase a wreath to be laid at the burial.

“They will all wear the professional white Advocate Collars with Black Robes during the church service. The LSK Chairman will make remarks before inviting former Attorney General and Chairman of the Counsel Amos Wako to read a message,” Mboya said.

Leader of the majority in the Senate Kithure Kindiki asked the family to take heart noting that the country had lost a great leader. He said the death came as a shock to the entire nation.

Minority Leader Moses Wetangula also told the family that the Senate would continue supporting them because the late Senator was a brilliant man.

“Mutula had an exceptional brain and we would like to request the family to allow us provide pall bearers at the burial. We shall play our part and continue being close to the family,” he said.

Nominated Senator Beth Mugo also condoled with the family saying the entire country was in mourning. She remembered Kilonzo for the reforms he brought towards gender balance.

“Sometimes it is difficult to find words when something like this has happened. It is one thing when somebody has been sick for a while and then they pass on. Somehow you get used to it. But when it comes so suddenly it becomes such a shock,” she said.

“Today we have seen such kindness from people; from bodaboda people all the way up to Members of the Senate and the National Assembly. That has really touched us,” he said on Tuesday.

Kilonzo passed on in his Maanzoni home in Machakos County on April 27. Former Vice President Kalonzo Musyoka announced the shocking news during a burial in Tseikuru in Mwingi North Constituency on Saturday afternoon.