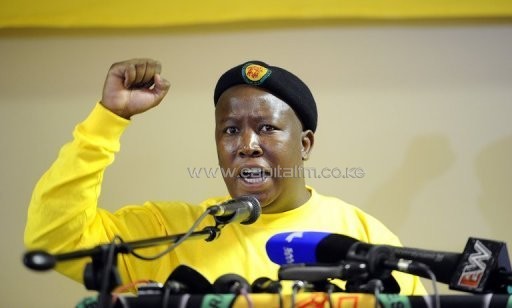 The winning bidder stumped up 5.9 million rand ($655,000, 500,000 euros) -- around double the projected selling price -- for the property in the upmarket Sandown area of the city/FILE
0
SHARES
ShareTweet

The winning bidder stumped up 5.9 million rand ($655,000, 500,000 euros) — around double the projected selling price — for the property in the upmarket Sandown area of the city/FILE

JOHANNESBURG, May 9 – A half-built Johannesburg mansion belonging to South Africa’s fallen political star Julius Malema was auctioned off for $655,000 Thursday to pay his tax arrears.

The winning bidder stumped up 5.9 million rand ($655,000, 500,000 euros) – around double the projected selling price – for the property in the upmarket Sandown area of the city.

The mansion has four bedrooms and bathrooms, a cinema room and cigar lounge, a strong room and staff living quarters.

Many onlookers and media attended the auction, which garnered more cash than expected, but not enough to cover Malema’s two million dollar tax bill.

Once a vocal supporter of President Jacob Zuma, Malema was kicked out of the ruling party last year for insubordination.

His fortunes have since taken a turn for the worse, leading to suggestions of political persecution.

The South African Revenue Service rejected his offer to pay a quarter of his 16-million-rand tax bill from 2005 to 2011, blasting his poverty plea as a lie.

They seized his two houses, a farm and a smallholding to recover the arrears.

To add to Malema’s woes, prosecutors have also charged him with fraud and corruption for allegedly arranging lucrative government tenders for cronies in return for kickbacks.