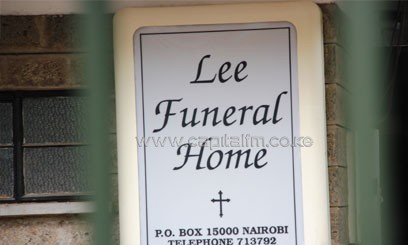 NAIROBI, Kenya, Apr 30 – A pathologist from the United Kingdom who is expected to join Kenyan doctors to conduct a postmortem on the body of the late Makueni Senator Mutula Kilonzo jetted into the country on Tuesday morning.

According to Machakos Senator Johnson Muthama the pathologist arrived in the country early Tuesday morning for the post-mortem expected to be undertaken later in the afternoon.

“The pathologist arrived at 6.20am and I am with him. He was not held up at the Jomo Kenyatta International Airport (JKIA) as some reports have suggested,” Muthama said.

On his part, the funeral committee’s spokesman Musyoki Kivindyo confirmed that the postmortem was on schedule to be conducted at the Lee Funeral Home from 2pm.

“According to Dr. Luke Musau, for the family, the team is ready to conduct the exercise. The Pathologist from the United Kingdom invited by the family, arrived in the country this morning and will be joining the rest of the team at the Lee Funeral Home,” Kivindyo said.

The family will update the media within the course of the day on any further developments.

Kilonzo’s family had on Monday postponed the post-mortem to Tuesday afternoon to allow for the UK-based pathologist to jet into the country.

Speaking on behalf of the Kilonzo family on Monday, Muthama said the kin wanted an opinion independent to that of the government pathologist given the former Cabinet Minister’s unexpected demise.

“We all know Mutula has never been a person who has been heard complaining of health problems. Secondly, he drove himself to his farm and from the information that was given by his workers when he arrived there he was in good health. Those are the issues everybody would raise and ask,” he said.

Muthama was however quick to add that the family was not necessarily insinuating that Kilonzo was murdered with the invitation of a foreign pathologist, but simply wanted no doubt over the cause of his death.

“Mutula being a person who was of the top level of leadership in this country, his issues cannot just be wished away. We need to give a clear position to Kenyans because they are waiting to hear and know what exactly caused his death,” Muthama explained.

Mutula who was found dead at his Maanzoni home on Saturday is expected to be laid to rest later next week.