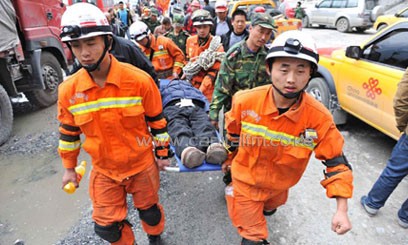 In the village of Yuxi in Baosheng Township, hundreds of residents have moved from the tents they built to water-resistant ones.

Armed police have put up 20 tents for villagers and helped them move their daily necessities inside.

According to the National Meteorological Centre, moderate rain will linger in the quake-hit region over the next few days, adding to difficulties in carrying out relief work and posing new threats such as collapses and landslides.

Traffic controls have been implemented in Lushan, where only relief vehicles are allowed to enter the region, a police officer told Xinhua outside Lushan Middle School.

Hundreds of students will be relocated to Chengdu to resume classes ahead of this year’s college entrance exam scheduled for June 7-8.