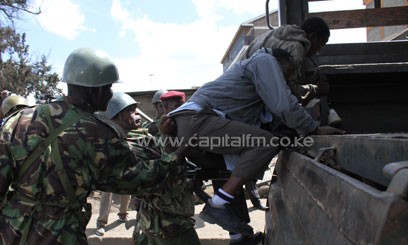 A police officer pushes a suspect onto a truck in a previous operation. Photo/ FILE
0
SHARES
ShareTweet

A police officer pushes a suspect onto a truck in a previous operation. Photo/ FILE

NAIROBI, Kenya, Apr 26 – More than 500 people have been arrested in the ongoing police operation to flush out suspected criminals in Garissa that started last weekend.

According to Inspector General of Police (IGP) David Kimaiyo, over 100 of them have been charged in court and he has vowed that the operation will continue until when normalcy is restored in the area.

“So far around 572 persons have been arrested on various grounds. Out of this, 111 have been arraigned in court, and Sh143,000 have so far been generated from court fines. The rest, who were able to pass security scrutiny were freed unconditionally,” said police spokesman Masoud Mwinyi.

Following complaints by locals that the operation was being carried out indiscriminately, he reiterated that the officers involved in the operation were well aware of the requirements of the law on such operations.

“There has been grumbling from a few people that the operation is punitive and is targeting innocent persons. Some still feel that the officers on the ground are unreasonably exercising their mandate. I wish to clarify that, the operation is purely being conducted with a view of containing the insecurity situation which is generally threatening the livelihoods of the people,” the spokesman insisted.

“Nobody should be fearful for as long as they are law abiding. The operation is meant to flush out and bring to book those elements creating fear and advancing criminal activities; nobody will be targeted without justification,” he added.

Kimaiyo who visited the area last Saturday has called on the public to give out information on the people perpetrating crime in the area for legal action to be taken.

He also revealed that other security operations will be carried out in Baringo, Kuria and the Coast province to address various elements of insecurity.

“The operations in Baringo and Kuria will be to address issues of cattle rustling which has continued despite several peaceful and non-confrontational efforts to address the same. In Coast, the operation will be aimed at addressing the various pockets of insecurity which has been experienced for some time now,” Mwinyi said insisting that the manner and time of the operation will not be made public.

Meanwhile, police in Nairobi are on high alert to arrest any terrorism suspect’s fleeing from Garissa following the massive security operation there.

Nairobi provincial police Chief Benson Kibue says they have activated their entire intelligence network to ensure suspects fleeing from Garissa are arrested as soon as they arrive in the city.

“We are set for them; we have put strategies to ensure that if terrorists flushed from Garissa come in the city we flush them out as well,” he said adding that the police were aware of the destinations in the city such people preferred.

Police have been undertaking a security operation in Garissa to flush out criminal gangs and terror suspects responsible for indiscriminate gun and explosives attacks in the border town.

The crackdown was launched last Saturday when Kimaiyo visited the region following a directive by President Uhuru Kenyatta after the killing of 10 people in the town.