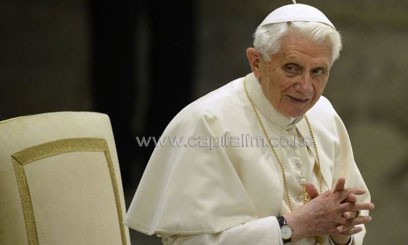 Pope Benedict XVI at his weekly general audience at the Paul VI hall in the Vatican, on February 13, 2013/AFP
Prev1 of 2Next
Use your ← → (arrow) keys to browse
0
SHARES
ShareTweet

Pope Benedict XVI at his weekly general audience at the Paul VI hall in the Vatican, on February 13, 2013/AFP

VATICAN CITY, Feb 13 – Pope Benedict XVI made his first public appearance on Wednesday since his shock resignation announcement, asking thousands of cheering pilgrims at the Vatican to “keep praying for me”.

The 85-year-old pontiff was greeted by a standing ovation and chants of “Benedetto”, his name in Italian, at his weekly audience in the Paul VI auditorium, with a prominent banner reading “Thank You, Holiness”.


Benedict, looking drawn and tired but appearing relieved to have put the momentous announcement behind him, said he had made his decision “for the good of the Church” adding: “Keep praying for me, for the Church and for the future pope.”

Wearing his workaday white cassock and skullcap, the pontiff – the first to resign voluntarily in 700 years – said he could feel the faithful’s love “almost physically in these difficult days”.

Vatican spokesman Federico Lombardi has said he expects a new pope in place in time for Easter, which falls on March 31 this year, although no date has yet been set for the secret conclave to elect a new leader of the world’s 1.2 billion Catholics.

As rumours fly over front-runners for St. Peter’s throne, commentators have said age may be a key factor in selecting a new pope, with 117 cardinals eligible to vote for one of their peers.

Tickets to Wednesday’s event were issued well in advance, so those attending experienced the historic moment out of sheer luck just two days after the pope said he would step down on February 28.

The pope will later celebrate Ash Wednesday mass marking the first day of Lent, his last public mass and one of his final engagements as pontiff.

The mass is traditionally held in the Santa Sabina Church on Rome’s Aventine Hill, but has been moved to St Peter’s Basilica out of respect for the outgoing pontiff and to accommodate the crowd of faithful who will want to mark the end of his eight-year rule – one of the shortest in the Church’s modern history.

The high point of Wednesday’s mass, which launches the traditional period of penitence ahead of Easter in the Christian calendar, will see the pope mark the foreheads of the faithful with ashes.

He will be honouring his existing engagements in the final days of his papacy.

On Thursday he will hold his annual meeting with the pastors of Rome. He will also meet the presidents of Guatemala and Romania as scheduled.

Next week will be given over to a spiritual retreat at the Vatican which is sure to be dominated by jockeying among factions within the College of Cardinals over the choice of Benedict’s successor.

On the next two Sundays, Benedict will recite the Angelus from his apartment window.