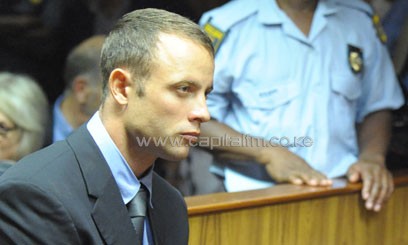 Pistorius appears at the Magistrate's Court to hear judgment on his bail application in Pretoria, South Africa, on Feb 19/XINHUA
Prev1 of 2Next
Use your ← → (arrow) keys to browse
0
SHARES
ShareTweet

Pistorius appears at the Magistrate’s Court to hear judgment on his bail application in Pretoria, South Africa, on Feb 19/XINHUA

PRETORIA, Feb 19 – South African sporting hero Oscar Pistorius insisted on Tuesday he did not intend to kill his girlfriend after being accused of shooting her repeatedly through a locked bathroom door in what prosecutors said was a “premeditated” Valentine’s Day murder.

“I had no intention to kill my girlfriend Reeva Steenkamp,” the 26-year-old said in an affidavit read out at a court hearing in Pretoria, his first public comments since the February 14 killing.

Magistrate Desmond Nair hinted strongly that the double-amputee Olympian and Paralympian “Blade Runner” would not be released on bail and could face a charge of premeditated murder.

But Pistorius said he fired at the door of the bathroom where his 29-year-old lover was hiding as he was “filled with horrible fear” that someone had sneaked into his luxury Pretoria home through an open window.

Prosecutor Gerrie Nel had told the court Pistorius had armed himself, put on his prosthetic legs, walked seven metres and fired four shots through the locked bathroom door, hitting a terrified Steenkamp three times and fatally wounding her.

“She could go nowhere,” he said, adding that Pistorius had “shot and killed an unarmed innocent woman”.

He said law graduate and model Steenkamp had arrived at Pistorius’s home on Wednesday evening with an overnight bag, seeking to counter claims that the athlete had mistaken her for an intruder.

As the court hearing was under way in the South African capital, Steenkamp was being laid to rest at an emotional private ceremony at a crematorium in her hometown of Port Elizabeth.

Pistorius, who broke down in sobs at Tuesday’s hearing when Steenkamp’s name was mentioned, became an inspiration to millions when he became the first double amputee to run against able-bodied athletes at last year’s Olympics.