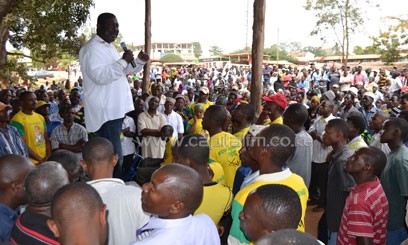 NAIROBI, Kenya Feb 8 – Amani Coalition presidential candidate Musalia Mudavadi has accused his rivals of misleading Kenyans that they had a solution to land related problems in Kenya.

Addressing a rally in Kwale County, he said leaders must be honest with Kenyans because the solution to long term land issues was not misleading populist pronouncements but in the formation of County Land Commissions.

“Amani promises to fast-track the formation of County Land Commissions under devolution after the elections so that they can address grievances felt by local people. No land transfers including expired leases renewal will be done without the say so of these commissions”, he said.

Mudavadi faulted other presidential candidates claiming to have solutions to land problems outside the Constitution saying it smacks of “evil” designs to abrogate the Constitution even before the “ink it was written” in has dried in the form of implementation.

“We are talking about the speedy appointment of the National Land Commission, but some fellows are talking about solving land problems through unconstitutional ways. Where will they get such powers outside the Constitution unless there is a hidden plan to abrogate it?” he asked.

Mudavadi said the land issue was emotive but there was no gain in exciting people about land with solutions that are not practical.

“When you talk like that, the people in Rift Valley are scared that you will take away their land as alleged by the “No” campaign during the referendum. Here at the Coast which carries many squatters, people assume they will automatically get free land after elections. I want to tell you they are lying to you,” he told a rally at Kinango in Kwale County.

His running mate Jeremiah Kioni said delay in appointing the National Land Commission may be interpreted as a plot to fraudulently acquire prime public land by some individuals before the commission starts work.

“We also suspect people want to make a kill by allocating themselves prime public land in areas where Vision 2030 flag ship projects are located”, he claimed while speaking on the Amani campaign trail at Lunga Lunga.