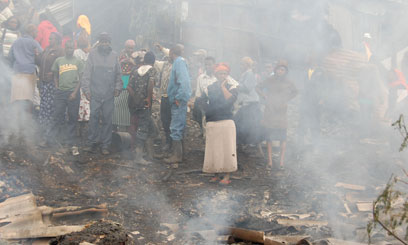 The midnight incident saw a large section of the slum razed, according to police, leaving hundreds of residents homeless/FILE
0
SHARES
ShareTweet

NAIROBI, Sep 12 – More than 100 people were burned to death when a fuel pipeline burst into flames in Nairobi’s Sinai slum.

“We are putting the number of dead at over 100, we are waiting for body bags to put the victims into,” said Thomas Atuti, area police commander.

The explosion happened in Nairobi’s Lunga Lunga industrial area, which is surrounded by the densely packed tin-shack housing of the Sinai slum.

“There had been a leak in the fuel pipeline earlier, and people were going to collect the fuel that was coming out,” said Joseph Mwego, a resident.

“Then there was a loud bang, a big explosion, and smoke and fire burst up high.”

Many residents were caught up in the blaze, which started around 8.30am.

“People were trying to scoop fuel from the pipeline,” a Red Cross official confirmed by telephone, adding that the organisation had sent a team to the scene of the fire.

“I have never seen this in my life. I have seen women and children burnt like firewood. The very worst was a woman burned with her baby on her back,” a local resident Francis Muendo said.

“We’re not sure about the number (of casualties)” said Dan Mutinda, a Red Cross official coordinating relief efforts at the scene of the fire. “From where I am I can see over 40 bodies burned completely. A couple have been swept away by the river.”

Some of those who caught fire jumped into a nearby stream to try to extinguish the flames when their clothing and hair caught fire, but many succumbed to their injuries in the water. Police have placed a net across the stream to prevent the bodies from drifting away.

Mutinda said the last of the injured have now been evacuated and he and his colleagues are now concentrating on “support and tracing services.”

The sound of ambulance sirens ferrying away the injured for medical care gave way to the shouts of children, some in school uniform, running around searching for their parents.

Bystanders covered their mouths to avoid choking on the acrid smoke. Firefighters in protective clothing sprayed chemical foam to try to contain the fire, while both police and soldiers roped off the area and pushed people back from the area.

Houses close to the pipeline were also engulfed in flames, their tin roofs buckling and disintegrating and their badly burned residents evacuated for medical care.

Local media said scores of burn victims had been taken to hospital and showed footage of the injured being ferried by ambulance.

In 2009, 122 people were killed after a fire erupted while they were drawing fuel from an overturned tanker in western Kenya.