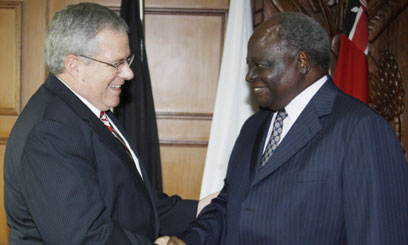 NAIROBI, Kenya, Jun 23 – President Mwai Kibaki has underscored Kenya\’s commitment to partnering with the US and other countries to stabilise Somalia and curb incidences of piracy in the Indian Ocean waters.

The President particularly urged the international community to assist in resolving the Somalia issue once and for all as it impacted negatively on regional peace and stability.

He called on the US to use its global influence to bring about lasting peace in Somalia. The President noted that IGAD member states had played a big role in supporting the people of Somalia but more needed to be done by countries that had pledged support for that country.

The President was speaking on Thursday during a meeting with US Ambassador Jonathan Scott Gration who paid him a courtesy call at his Harambee House office.

On the bilateral front, President Kibaki said the Government looks forward to deepening of Kenya/United States relations during the tenure of Amb. Gration who is familiar with not only Kenya but also the entire sub-region.

Said the President: "This could be achieved through engagement on the basis of mutual respect and tolerance for each other\’s views, as well as cultivating stronger links with the Kenya Government instead of the civil society as has been the case in the past."

Speaking during the meeting, Amb. Gration assured President Kibaki of his commitment to working towards deepening the relations between Kenya and the US.

The US Ambassador confirmed that during his tenure in Kenya, he would put more effort to bolster the existing cooperation between the two countries in all spheres of social and economic development.

Amb. Gration particularly said he would encourage American investors to establish businesses in Kenya as a way of promoting trade between the two countries.

Commending Kenya\’s achievement in the reform agenda, the US Ambassador said the promulgation of the new Constitution last year and the ongoing reforms in the judiciary and the police will not only benefit Kenyans but also investors from other countries.