By , SYDNEY, Dec 2 – A strong 6.9-magnitude earthquake rattled Papua New Guinea on Thursday, the US Geological Survey said, but there was no threat of a tsunami.

The quake struck at a depth of 32 kilometres (20 miles), 37 kilometres northeast of Kandrian in the New Britain region, USGS said.

Geoscience Australia senior seismologist Clive Collins said there was a possibility some damage had occurred in Kandrian.

"It was probably quite strongly felt in Kambrian," said Collins.

"There could be some damage there."

Geoscience Australia estimated the quake at a depth of 60-80 kilometres and said its epicentre was likely either onshore or in shallow water just off the coast of New Britain, meaning there was little risk of sufficient water being displaced to cause a tsunami.

Seismologists on the ground in PNG told AFP the quake had been felt strongly in both Kandrian and nearby Kimbe, but there were no immediate reports of destruction in the area. They could not rule out some damage in villages close to the epicentre.

Papua New Guinea, which is mired in poverty despite rich mineral deposits, sits on the so-called "Pacific Ring of Fire", a hotspot for seismic activity due to friction between tectonic plates and quakes are frequent.

But large quakes often cause little damage in the mountainous nation, which has remote and sparsely populated areas. 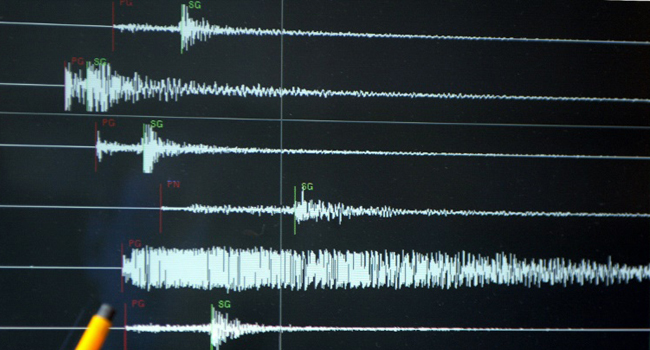