If someone ever tells you that Nigerians do it big when it comes to the red carpet, believe them.

I received an invite from Multichoice and DSTV Kenya to attend the fourth Africa Magic Viewers Choice Awards, 2016, to be held in Lagos, Nigeria (05.03.16). The event was to take place at Eko Hotel, situated in the hustle and bustle of the vibrant Victoria Island, and just a stone throw away from the hotel that I would be staying at – Maison Farenheit.

The day before the awards, a cocktail party was held for all nominees where some of Africa’s biggest film and entertainment stars came together.

If the band from the cocktail party was any sign of what to expect from the award ceremony, it was clear we were in for a memorable night. Not only did they have amazing voices but among the renditions of popular African songs was Sauti Sol’s Shake Yo Bam Bam. And you can rest assured the Kenyans in the house did indeed get up and get shaking.

Saturday’s red carpet glam started and 4pm with Africa’s top stakeholders in the film industry lighting up the red carpet in dazzling gowns and sharp suits. For a fashion lover, this was heaven. Bold colours, delicate, embellished details and statement trains dominated the scene giving the Oscars a run for its money.

The event was hosted by the handsome IK Osakioduwa and South Africa’s sweetheart and TV host Minnie Dhlamini and featured exciting performances from Flavour, Yemi Alade, Zonke and South African comedian, Thomas Gumede. Although it was Uganda’s top comedian, Salvador, who left the entire room in stitches and clapping for more!

One of the evening’s highlights was the receiving of the 2016 Industry Merit Award by Nollywood legends Sadiq Daba and Bukky Ajayi. An emotional Bukky Ajayi received a standing ovation from the audience who acknowledged her contributions to African film and cinema spanning over 50 years.

“For those I have offended, I am sorry. And if you have offended me, I forgive you.” Bukky Ajayi said while accepting her award leaving the room in awe of her grace.

I’ve been to several award shows in my lifetime but this was by far one of the most glamorous events.

Congratulations to all the winners! 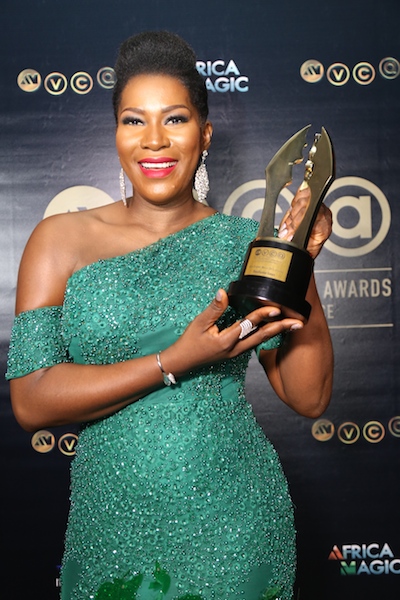