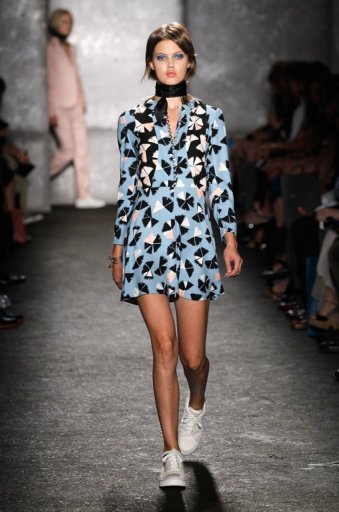 Marc Jacobs on Tuesday delved into the rock looks of yesteryear for next spring, offering up a blur of pastels, sequins, stars and radiowave stripes for his diffusion line.

From the bright blue on models’ eyelids to the lightning-jagged patterns on dresses and giant star motifs, the electrifying look for Marc by Marc Jacobs was unveiled in a large, brightly-lit industrial building alongside the Hudson River.

Models walked to the energizing sound of Jeffrey Lewis’ “WWPRD (What Would Pussy Riot Do)” — an ode to the female activist Russian punk rock group. Two members have been jailed over a church protest.

Shiny satin varsity jackets and dresses had a 1950s feel while a jumpsuit made entirely out of sequins was a throwback to the 1980s.

Pants were slouchy, and several shiny dresses had large stars in silver or black snaking up the side.

Female models had scarves tied tightly around their hair and necks, while some wore guitar pick necklaces.

It was the first of two outings for Jacobs this week — he shows his main line on Thursday, the last day of New York’s fashion parade. Paint-spattered pants in military green met a smart white shirt with navy blue stripes on the sleeves, while a shimmering mint knee-length skirt contrasted with a large “Aloha” t-shirt.

“It’s easy to do beach-inspired, it has been done. I wanted something a little more complex,” Mora told AFP.

“I was thinking about the duality of beach culture,” from surfing in California to the “contrast of the Lido lifestyle on the Venetian coast at the turn of the century, where you have proper dress with lace eyelet, nautical stripes, tailored blazers.”

Obama is famous for mixing high-end and low-end pieces to create her own signature brand of chic. When she wears something from J.Crew, the items often sell out.

“You couldn’t ask for better advertising — not only is she the first lady but she also has really independent style, she knows what she likes and isn’t afraid to step out,” said Mora.

“To be a part of her journey in the White House has been an amazing thing.”

He however insisted that having Obama as a fan had not influenced his designs, as he likes being surprised when she chooses them.

‘We don’t design into it. I like it much better when we just see it happen,” he said.

Dutch-born Frank Muytjens, the brand’s menswear designer, said he was inspired by America’s natural parks for a more “rounded, earthy, crafty” look for men next spring.

“Nature is genuine and never bores,” he said.

American designer Tory Burch, the billionaire queen of ballet flats and handbags, drew inspiration from the glamour of the French Riviera in the late 1960s for her spring collection.

The runway at Lincoln Center resembled the swirling turquoise depths of a swimming pool as models showcased dresses, tunics, swimsuits and maxi-dresses in fresh green, white and coral with botanical prints.

Fashion week ends in New York on Thursday before the style parade moves over to London, Milan and Paris.