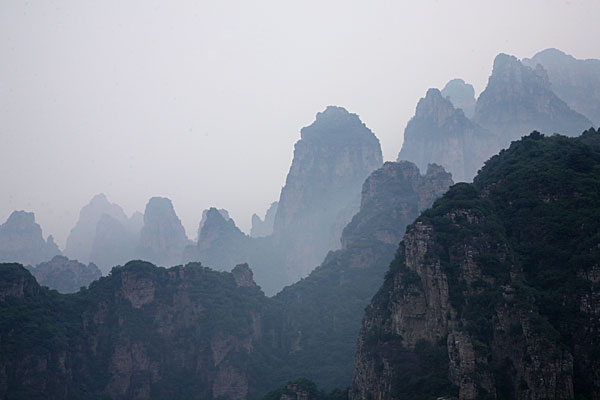 (XIN HUA) Beijing itself is flat as a pancake, with just a hint of mountains to the west. Travelers in search of some verticality need not go all the way to Guilin to take in some steep rocky slopes. Hebei province’s Mount Langya is one of China’s national forest conservation areas, and its peaks somehow pass under the radar of most travelers.

Although few foreigners are acquainted with Mount Langya, virtually every Chinese knows about it: not for its scenery, but for its history. Mount Langya is the site where five brave soldiers held back the Japanese while the Chinese civilians evacuated. Eventually the five men ran out of ammunition, destroyed their rifles, and then leaped off the mountain to their deaths. This beloved story has been the subject of a number of paintings and also a movie. A museum at the base of the mountain provides more insight into the details of the five men’s fight, though English signage is limited.

Just a few hours outside of Beijing, the mountain itself is provides a stark contrast to the plains of Beijing. The trek to the top one is a long one, not only because it’s arduous but because hikers keep stopping to reach for their cameras. Taking this into consideration, hikers should allow themselves at least two hours to get to the top.

The first few kilometers of the hike are along a man-made river. It’s attractively done, though completely unnecessary for those who actually want to experience a more authentic version of nature. Artificial deer and monkeys punctuate the hike, just in case the region’s wild animals are feeling shy.

An impressive cave is located about half an hour up the mountain, which is included in the ticket price. Stalactites, stalagmites and other strange rock formations drip with water beneath multi-colored lights. Visitors couldn’t ask for a better excuse to stop and catch their breath.

As the elevation increases, the river eventually disappears, making way for the simplicity of trees and jagged rocks. Eventually hikers find themselves within a circle of steep rock faces, reminiscent of a wolf’s teeth, careening towards the sky. This mouth of teeth is the characteristic for which the areas is named: Wolf Teeth Peak.

The winding paved pathway and a few extended stairways push on toward the summit. If the weather is clear, visitors will be treated to sensational views of the surrounding mountain area.

Those brave enough to climb the steep ladders up the tower at the peak will be treated to even more impressive perspectives.

Those who don’t feel up to such a long hike can be thankful that a chair lift is available to cover the bulk of the distance.

The bottom of the mountain area is the busiest part of the park, replete with vendors, artificial waterfall, and inflatable cylinders to play in. Surely, this area appeals to many, but the true treasure of Mount Langya is the experience of slowly but surely trekking one’s way up to the final reward of the mountain’s apex.

Mount Langya is located about 150 km away from Beijing, in Hebei province, near Baoding.