For the past week, the international fashion world descended on Johannesburg for 2011 Africa Fashion Week held at Sandton Convention Center.

Co-sponsored by South Africa Tourism, the three day-long festivities showcased the spring and summer 2012 collections of thirty designers including from Mataano, the label of Somalian-born and New York resident Mohallim twins; Bunmi Koko, the label of Nigerian Bunmi Olaye based in London and a favourite of celebrities; and David Tlale’s show-stopping self-named label, just to name a few.

The 3rd annual Africa Fashion Awards capped off the star-studded and prestigious week. The ceremony, which started well after midnight on Saturday, after David Tlale’s off-site show in South Africa’s mint factory, saw Kenyan model Ajuma Nasenyana win the Model of the Year award for the second time.

In a Capital Lifestyle exclusive interview days prior to Africa Fashion Week, the Turkana beauty spoke about her unlikely chances to win the coveted award again.

“There are many up and coming models doing well right now and I really think they wouldn’t give the award to someone more than once,” Ajuma humbly states.

Despite her self-doubts, Ajuma Nasenyana took home the Model of the Year award to resounding applause. Ajuma attributed her distinctly strong runway walk to “the great talent of Africa.”

Ajuma was also selected by numerous designers of this year’s fashion week to either dramatically open or close their shows, which is a testament to the Kenyan’s cemented status in the modelling world.

Asked about her expectations of this Africa Fashion Week 2011, Ajuma praised all of the designers for their incredible talent and technical skills.

A big congratulations to Kenya’s own, Ajuma, from the entire Capital Lifestyle team!

Here are some of Ajuma Nasenyana’s best moments during 2011 Africa Fashion Week: 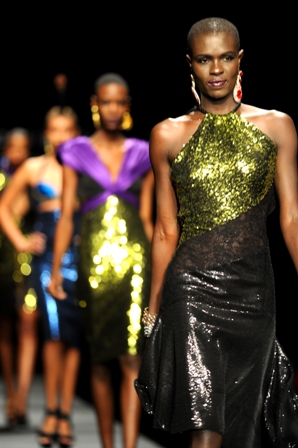