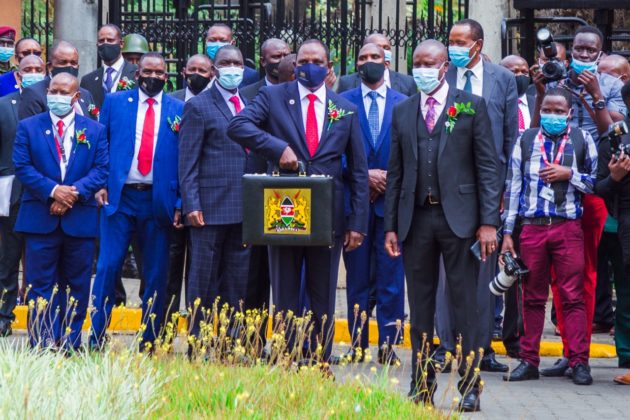 Treasury CS Ukur Yatani displays the budget briefcase before he read out in Parliament on June 10, 2021. /SAM WANJOHI.
15
SHARES
ShareTweet

NAIROBI, Kenya Jun 10 – Government agencies and counties have been directed to clear all verified pending bills by the end of June.

In his Budget statement on Thursday, Treasury Cabinet Secretary Ukur Yatani said all verified pending bills must be paid by June 30 before the commencement of the new financial year.

Yatani has asked Parliament to suspend funds allocations to public entities which do not adhere to his directive.

Yattani noted that the delays in payment of pending bills to businesses that have offered services to both the national and county government has affected the liquidity of the entities.

“In a number of cases, this has led to the closure of businesses and affected the livelihoods of the suppliers,” the National Treasury CS observed.

This follows a proposal by MPs for the National Treasury to float a long-term bond to raise funds to settle billions of shillings in pending bills to suppliers in a move likely to raise the country’s public debt to new highs.

The Parliamentary Budget and Appropriations Committee said pending bills remain a major headache in the Government’s budget cycle, eroding resources for development expenditure and increasing the number of stalled projects.

An audit conducted by the Auditor General on behalf of the National Treasury in 2018 indicated that both the central and county governments owe suppliers more than Sh225 billion dating back several years.

Advertisement. Scroll to continue reading.
15
SHARES
ShareTweet
In this article:featured