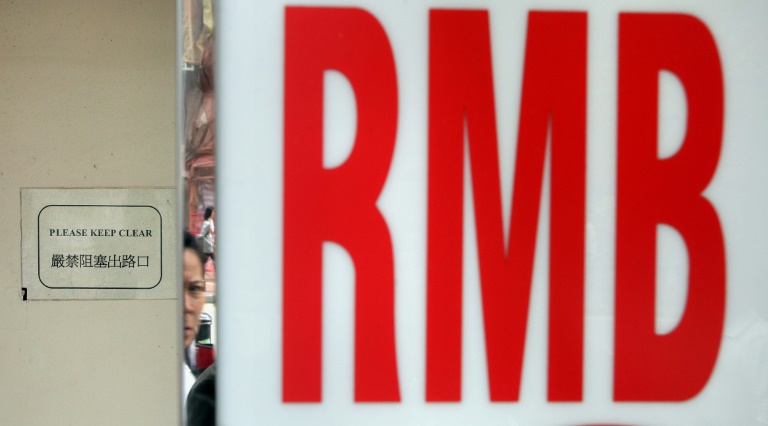 At the center of the issue is a paradox: China does not necessarily want a weak currency © AFP / Ed Jones

Paris, France, Mar 3 – US officials have said any trade deal with China will include a provision to prevent manipulation of the exchange rate to help exporters but Beijing’s currency regime reflects a complex reality.

US President Donald Trump, who has accused the Asian giant of artificially undervaluing its currency for competitive purposes, last week said “we have a deal” with China on the currency.

And White House economic adviser Larry Kudlow on Thursday said the draft documents would prohibit currency manipulation and oblige authorities in Beijing “to report any interventions in the market.”

But at the center of the issue is a paradox: China does not necessarily want a weak currency, and the downward pressure on the yuan is in large part caused by US economic conditions, like rising interest rates.

– Is the yuan undervalued? –

The yuan or renminbi (RMB) is not freely convertible and the government limits its movement against the US dollar to a two percent range on either side of a central parity rate which the People’s Bank of China sets each day to reflect market trends.

That managed float system limits volatility: the currency has remained confined in the last five years between 6.2 and 6.8 yuan to the dollar, a historically high level, compared to 8.28 fixed rate in the 2000s.

While the RMB strengthened 6.3 percent in 2017, it depreciated by 5.7 percent last year, falling to its lowest level in a decade, which was enough to spur speculation Beijing was putting its foot on the currency scale again.

But the International Monetary Fund has said the RMB is not undervalued, and in a July report said it was “broadly stable against the basket of currencies … and broadly in line with fundamentals.”

Even the US Treasury has regularly acknowledged in a semi-annual report, most recently in October, that Beijing is not manipulating its currency.

Beijing, however, shook the markets in August 2015 with a one-time devaluation that weakened the yuan by about five percent in a week.

The decision led to massive capital flight out of China, which exacerbated the currency’s decline. Outflows amounted to nearly $650 billion in 2016.

– Can Beijing control the currency? –

The PBOC actively intervened in currency markets in 2015-2016 to counteract this depreciation, using its massive foreign reserves to buy yuan. Capital flight slowed as the RMB stabilized.

Analysts say more recent weakening of RMB is not due to manipulation but is the result of China’s economic slowdown, the trade war, and rising US interest rates that push up the value of the dollar against all currencies as investors search for higher yields.

But amid renewed optimism on the progress of trade negotiations with Washington, the yuan has rebounded by almost three percent since early January.

China certainly can use its colossal foreign reserves — $3.1 trillion at the end of January — to intervene if it chooses to prop up the RMB.

And after the experience in 2015 and 2016, anxious to halt the yuan’s plummet, the PBOC had drastically tightened capital controls to keep funds from flooding out of the country.

A weakened yuan makes Chinese exports cheaper and more competitive and can therefore partly offset the impact of US tariffs.

But economists dispute the Trump administration’s claim that Beijing has been keeping the currency artificially weak and in fact say it has been making an effort to keep it from falling too much.

And since August, the PBOC said it would use a “counter-cyclical factor” to calculate the daily exchange rate range, a move said to keep the RMB relatively stable.

That makes economists question the Trump administration’s demands, even though they acknowledge that China’s intervention from 2002-2010 helped to drive up the US trade deficit.

Adam Posen, head of the Washington-based Peterson Institute for International Economics, cautioned the Trump team against using 1950s era strategies to solve modern trade issues, which tariffs and exchange rates are less able to deal with.

Insisting on “a market-determined exchange rate for China … sounds nice but is nuts,” Posen told AFP.

“If you start doing what the Trump team is doing and say the currency can’t ever go down, you’re just going to cause a mess.”

But Mark Sobel, a former US Treasury official, said if the US and Beijing focus on currency stability, conditions “are ripe” to achieve that: the US Federal Reserve has paused interest rate increases, and China’s stimulus efforts are showing signs of stabilizing a slowing economy.