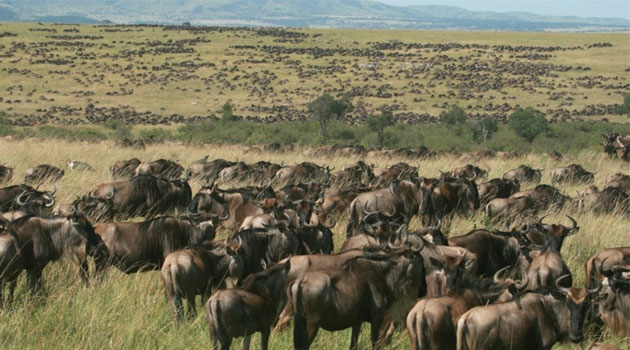 Speaking during his tour of the Maasai Mara Game Reserve, where he witnessed the annual wildebeest migration, Balala said that the campaign seeks to position Kenya as a home of two naturally iconic and spectacular tourism attractions.

“The annual wildebeest migration remains one of Kenya’s most spectacular tourism attractions,” he stated.

As part of the campaign, the Ministry of Tourism & Wildlife, through the Kenya Tourism Board is working with well-known wildlife photographers to showcase the natural wonder of the twin migration along with Kenya’s authentic and diverse tourism product offering.

The Tourism and Wildlife CS said his ministry is currently formulating a detailed tourism development strategy for the Maasai Mara, which will include a policy on standards of vehicles permitted to access the reserve, vehicle capacity limits during various seasons of the year, as well as a Sustainability Strategy for the reserve.

“The Ministry of Tourism and Wildlife is committed and steadfast in its efforts to improve management of Maasai Mara in order to enhance the visitor experience for tourists coming into the reserve. We believe that Maasai Mara has the potential to attain the status of a World Heritage Site,” he stated.

The Tourism and Wildlife Cabinet Secretary also announced that Kenya’s tourism industry is on a steady growth path, adding that hotels within Maasai Mara are currently fully occupied.

“We anticipate the tourism peak season will see record visitor numbers both at the Maasai Mara and at the Coast. Most hotels in the Mara are recording 98 percent occupancy levels. We urge tourists visiting the Coast to extend their tour to Watamu where they will witness the ongoing migration of humpback whales along the Coast.”