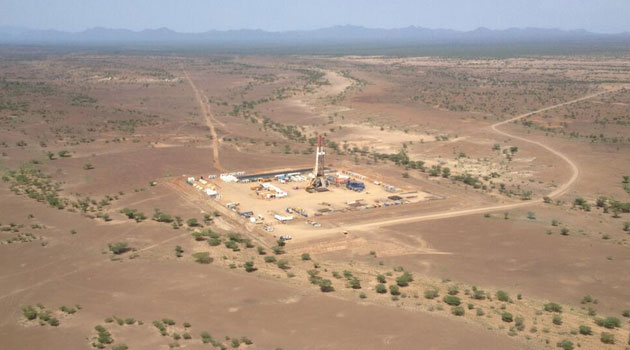 Oil field in Turkana where Tullow Oil is exploring/FILE

NAIROBI, Kenya, Jan 18 – Tullow Oil plc (Tullow) has announced the discovery of gross oil interval of 55 metres with 25 metres of net oil pay at a depth of 700 metres in Kenya, even as the country prepares for oil exportation.

On Tuesday, the firm said the overall oil column for the field is considered to be 100 to 125 metres.

The objective of the well was to test a structural trap at the northern limit of the South Lokichar basin.

“The Erut-1 well was drilled ten kilometers north of the Etom-2 well and shares important characteristics. Fluid samples taken and wireline logging all indicate the presence of recoverable oil.  Erut-1 successfully shows that oil has migrated to the northern limit of the South Lokichar basin and has de-risked multiple prospects in this area which will now be considered in the partnership’s future exploration and appraisal drilling programme,” the firm says.

The PR Marriott Rig-46 drilled the Erut-1 well to a final depth of 1,317 metres and will now move to the southern part of Block 10BB where it will spud the Amosing-6 appraisal well.

Tullow operates Blocks 13T and 10BB with 50 percent equity and is partnered by Africa Oil Corporation and Maersk Oil both with 25 percent.

“This is an exciting discovery from a bold exploration well that proves that oil has migrated to the northern limit of the South Lokichar basin. This extends the known hydrocarbon limits of the basin beyond the successful Etom discovery into the underexplored northern part of the basin where we have several undrilled prospects. Following the scheduled appraisal wells at Amosing-6 and Ngamia-10, further exploration drilling of this area is now being planned,” said Angus Mccoss Exporation Director.

The move comes even as the International Monetary Fund (IMF) urged Kenya to minimize reliance on oil whether for fiscal purpose or export as the country gears towards the Early Oil Pilot Scheme (EOPS) project.

Director for the African Department, at the IMF Abebe Aemro Selassie urged Kenya to maintain the diverse economic structure.

He said Kenya should learn lessons from oil exporting countries in the continent and maintain diverse economic structures.

“I think the number one thing that you keep hearing from countries in West Africa, other oil exporters right now, is the importance of maintaining a diversified economy. These countries are emphasising that they wish they had much less reliance on oil exports,” he says.

This follows President Uhuru Kenyatta’s directive to expedite exportation of Kenya’s first oil. Tullow Oil has confirmed that it will start oil production in March this year.