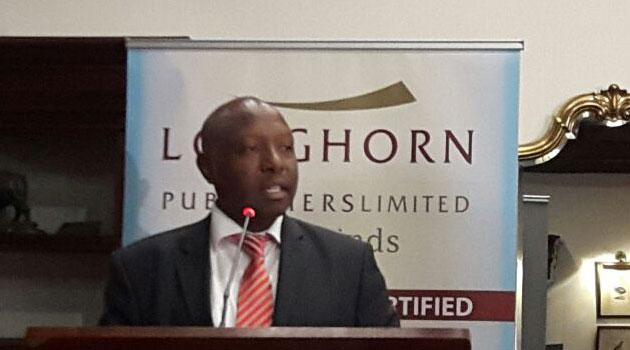 Speaking to Capital FM Business, Group Managing Director Simon Ngigi says the process has been necessitated by the emerging challenges affecting the publishing industry in the markets they operate that include digital disruption, piracy, and government policies/FILE
SHARES
ShareTweet

Managing Director Simon Ngigi says the continued growth of the menace has been due to lack of stiffer penalty, which now stands atSh800,000/CFM NEWS

NAIROBI, Kenya, Aug 19- Longhorn Publishers says it lost at least Sh450 million due to books piracy in 2016 financial year, raising concerns over the increase of the vice in the country.

Managing Director Simon Ngigi says the continued growth of the menace has been due to lack of stiffer penalty, which now stands atSh800,000.

He says if not addressed the issue continue to affect the publishing industry, which at the moment is suffering a 30 percent loss to piracy.

“For every three books one pirated. And that is a fact, and it has been there for the last five years. The problem is the penalty. Kenya is a law abiding country so when you are convicted with a crime you can only be dealt with in accordance with what the penalties are, in the law. Currently it’s Sh800,000, so nobody cares as they know they can be able to afford that because they have stolen 100 times more,” Ngigi lamented.

He says it was time to change the laws and address the issue as a public concern and not treat it as a publishers’ problem.

“These people get one of our books from the store, taken down town for photocopying and sold to schools. The papers they use are shiny and end up harming our children eyes. It’s a big problem.” Ngigi said.

He was speaking on Friday during the release of the company’s 2016 full year results where the company announced a net profit of Sh101million compared to Sh63 million in full year 2015.

Turnover rose to Sh1.5 billion from Sh848 million last year, making it the first time the company hits the Sh1 billion mark since its inception.

The growth in both revenue and profit was attributed to the achievement of the company’s strategies of product and geographical diversification.

In the course of the year, the company acquired distributorship rights of key products from Cambridge University Press, Bible Society of Kenya, Biblica Kenya, Scripture Union of Kenya and Educat of South Africa.

“These products enabled us Longhorn to firmly take the market leadership in the market reference segment,” he said.

The company also realised 26 percent of its sales from its export market with Zambia, Malawi and Rwanda recording the highest sales.