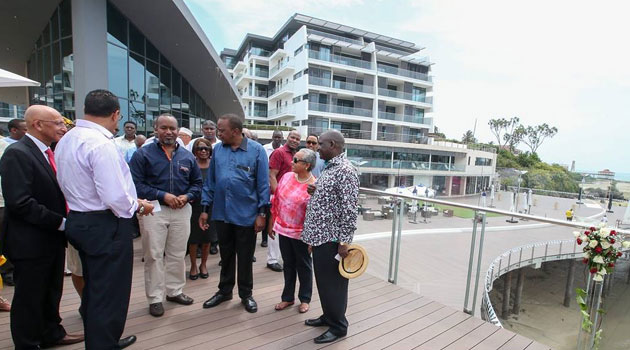 The President announced a raft of initiatives that will revitalise the industry such as a Sh1.2 billion incentive for charter flights to stimulate tourism arrivals at the Coast/PSCU
0
SHARES
ShareTweet

The President announced a raft of initiatives that will revitalise the industry such as a Sh1.2 billion incentive for charter flights to stimulate tourism arrivals at the Coast/PSCU

MOMBASA, Kenya, Jan 12 – The tourism industry received a major boost as President Uhuru Kenyatta opened a marina in Mombasa, the only one of its kind between Cape Town in South Africa and Cairo in Egypt.

The President announced a raft of initiatives that will revitalise the industry such as a Sh1.2 billion incentive for charter flights to stimulate tourism arrivals at the Coast.

“This will encourage those already flying in to increase the frequency of their flights,” President Kenyatta said.

The President disclosed that visa fees for children under 16 will also be waived with effect from February 1.

To bring park entry fees down, President Kenyatta directed the National Treasury Cabinet Secretary to initiate the amendment of the VAT Act and incorporate the amendments in the Finance Bill for financial year 2016/2017.

The Head of State spoke on Tuesday when he opened the English Point Marina, a multi-billion shilling landmark resort in Mombasa County. First Lady Margaret Kenyatta and Cabinet Secretaries Judy Wakhungu and Eugene Wamalwa were at the event.

President Kenyatta said the resort is a major endorsement of the recovery strategy of the country’s tourism and hospitality industry, adding that it heralds good tidings in the sector.

President Kenyatta also said the waiver of the landing fees at Mombasa and Malindi airports for charter planes will be extended to June 30, 2018 to help the industry regain its full strength.

“In return, I must ask all players to respond to these initiatives, and to the ongoing consultations, with the seriousness they deserve. It is time to make the most of our heritage and our gifts,” President Kenyatta said.

He said the government has also supported tourism in three key areas: infrastructure, security and renewal of partnerships with stakeholders in the industry.

“The improvements in security are there for all to see. We dare not allow that momentum to be lost,” he said.

On infrastructure, President Kenyatta cited the recent launch of the construction of the Port-Reitz-Airport Road in Mombasa, and the planned Dongo Kundu bypass – that will allow tourists to get from the mainland to the South Coast without using the ferry – as some of the measures that will promote tourism.

“Even as we work on the bypass, I have instructed the Kenya Ferry Services to step up their management of passenger transportation through Likoni Channel,” President Kenyatta said.

He said the ongoing expansion of Malindi Airport and the Jomo Kenyatta International Airport (JKIA) will enable the facilities to cater for more visitors, noting that JKIA will soon receive direct flights from the US.

The President thanked the United States, United Kingdom and French governments for the recent lifting of travel advisories.

“They recognise, as well as we do, that security here has vastly improved, and that there is much to be gained by partnering with Kenya and the region,” the President said.

“We are developing a programme to make our tourism products affordable and attractive,” CS Balala said.