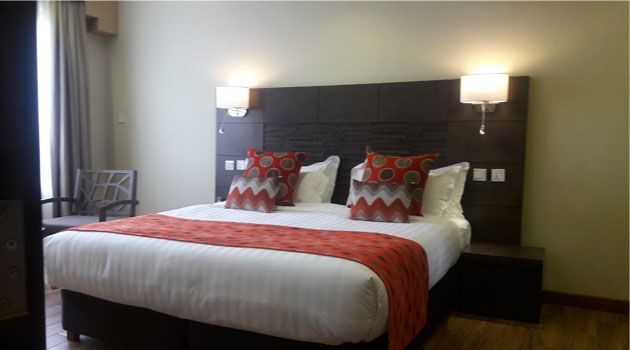 NAIROBI, Kenya, Oct 19 – President Barack Obama may have been in the country for only forty eight hours over two months ago, but some businesses are still reaping the benefits of his visit, especially those in the hospitality industry.

Bidwood Suites hotel in Westlands is one of those businesses.

“Before President Obama’s visit, business at the hotel was not very good. We had less than 50 percent occupancy. However, when he touched down in Nairobi, all our rooms were fully booked,” says Ambrose Mwendwa, the Sales and Marketing Manager of Bidwood Suites.

“We were able to host GES delegates who definitely gave our hotel a good name,” Mwendwa says.

Bidwoods Suites was not the only beneficiary of the Obama visit. According to Mwendwa, other hotels close to the UN, the US Embassy and the city centre whose standards and service were of good quality, were also big beneficiaries.

Fast foward, Mwendwa explains that the hotel has been able to retain up to 80 percent of occupancy since the GES summit n July.

So what has retained business for Bidwoods Suites hotel and other hotels in the City Centre and its environs?

“Conference tourism. This is where money is for people owning hotels in Nairobi and its surroundings,” Mwendwa says.

According to Mwendwa, this type of tourism has been the greatest source of income for hotels following the downfall of international tourism. He explains that with conferencing, comes accommodation, which is where business lies.

“Food on its own does not generate as much money as conferencing does, hence we are trying as much as we can to tap into this field.”

And the phenomenon has quickly being picked up by hotels around the country collectively.

Mwendwa explains that the decision to diversify into conference tourism was informed by the trouble that followed the industry following travel advisories being issued against Kenya because of isolated terror attacks in the country as the domestic market was their next best option.

But since Obama’s visit and the calm that the country has experienced in recent months, the industry has been on a steady road to recovery.

Mwendwa therefore goes on to predict a positive trend for the hospitality industry in the coming months. He says that having Obama and now the visit by Pope Francis in November, are all bound to put a positive spotlight on Kenya as a tourist destination.

“We are optimistic that the visit by Pope Francis will equally mean big business to hospitality industry. Not just because of his scheduled visit, but because of the buzz that will come with his stay in Kenya,” he adds.

As he concludes, Mwendwa urges the government to continue marketing Kenya both domestically and internationally. He says that he is glad the country has factored in the importance to encouraging Kenyans to explore their own country.