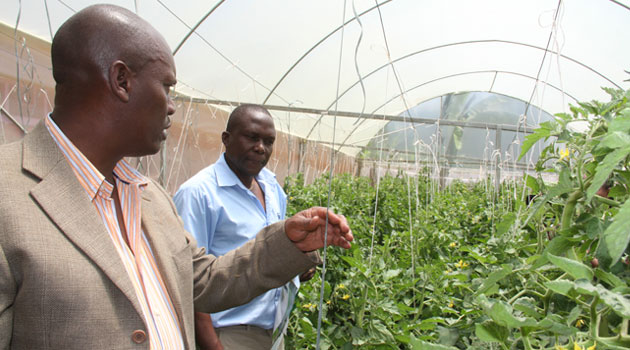 Speaking in Wangige town during the launch, the Governor said that it was important for the residents to seek alternative means of economic growth such as farming/CFM BUSINESS
0
SHARES
ShareTweet

Speaking in Wangige town during the launch, the Governor said that it was important for the residents to seek alternative means of economic growth such as farming/CFM BUSINESS

NAIROBI, Kenya, Feb 5 – Kiambu Governor William Kabogo has launched a farmer’s scheme where they can borrow funds to invest in greenhouses at a flat rate of 5 percent.

This is in a bid to shift the farmers from rain fed farming that has often proved frustrating due to erratic rainfall patterns.

Speaking in Wangige town during the launch, the Governor said that it was important for the residents to seek alternative means of economic growth such as farming.

“My government wants to raise the status of living for the residents of this county and one of the ways is through farming,” he stated.

“We shall set aside enough money for people to borrow so that they can set up greenhouses.”

He noted that the Kiambu County Government was aiming at making the county food secure and would invest more in agriculture at the economic rich region.

“Agriculture sector is the predominant economic activity in our county involving over 80 percent of the population. It is therefore a leading sector in terms of employment, food security, income generation and overall contribution to the social-economic well being of Kiambu population,” he said.

He added that he was, “committed to creating an enabling environment for the realization of the agricultural development objectives envisaged in the strategic plan we have launched today.”

Governor Kabogo further called on area leaders to unite in a bid to efficiently deliver their mandate to the electorate.