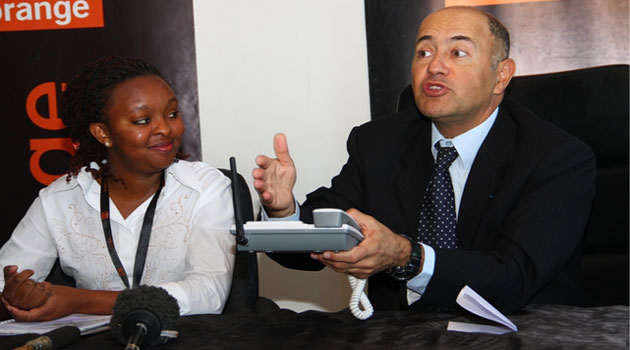 Telkom Kenya Chief Executive Officer Mickael Ghossein told journalists on Tuesday that the company is investing over Sh2.5 billion as it seeks to transform its operations to enhance service delivery and increase market share/FILE
1
SHARES
ShareTweet

Telkom Kenya Chief Executive Officer Mickael Ghossein told journalists on Tuesday that the company is investing over Sh2.5 billion as it seeks to transform its operations to enhance service delivery and increase market share/FILE

NAIROBI, Kenya, Apr 15 – Telkom Kenya has refuted reports that it will shut down its operations in Kenya, saying it is instead investing more in the country.

Telkom Kenya Chief Executive Officer Mickael Ghossein told journalists on Tuesday that the company is investing over Sh2.5 billion as it seeks to transform its operations to enhance service delivery and increase market share.

Ghossein explained that France Telecom that has 70 percent shareholding in the company is looking for strategic partners that will pump in more capital to the business.

The Kenyan government holds 30 percent stake in the company.

“We are putting in more capital to meet growing demand for our services to the market and provide our customers with superior services,” Ghossein said.

He said the capital expenditure is targeted at rolling out 3G network across the country, expand the national optic fibre backbone and launch the Multi Service Access Node (MSAN).

The telco is also constructing the national backbone fibre and laying of transport cables across the country in preparation for the launch of Internet connectivity via optional fibre networks in Kenya and by extension the region.

Ghossein also said they are also constructing and managing the National Optic Fibre Backbone Infrastructure (NOFBI) on behalf of the government and currently has five operators using the network having constructed a total of 5,200 kilometres of duct fibre.

He said the company has built and is operating three of the four landing stations for fibre optics, that include The East African Marine Systems (TEAMS), Eastern African Submarine Cable System (EASSy) and the Lower Indian Ocean Network (LION II).

“These cables continue to carry Internet and private data traffic within and without the country, enabling Kenya to continue growing its National Broadband Agenda as well as the realization of the National ICT Master Plan and the country’s Vision 2030,” he said.

He also said that the company is currently in the second phase of the fixed technology refresh with a roll out of high speed network, supported by MSAN technology that allows for the aggregation of multiple subscribers on the network.

“Telkom Kenya is an ongoing business concern and we are focused on growing our business and serving our customers,” he said.