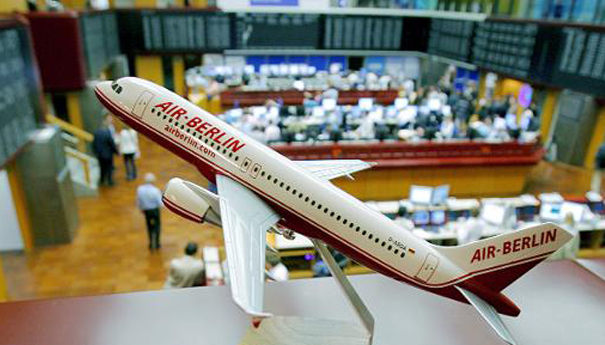 FRANKFURT, Mar 27 – Air Berlin, Germany’s second biggest airline, announced overnight Wednesday that it will postpone its annual earnings news conference as it continues to work on its recapitalisation plans.

Air Berlin said in a statement that its “board of directors is continuing to work on measures for a recapitalisation which will strengthen our equity and liquidity position.

“The company is continuing its discussions on those measures with certain shareholders and finance providers,” the statement said.

“At the same time, the company is currently in the process of finalising its annual financial results for the 2013 financial year. The annual press conference on financial results that was scheduled for March 27 as well as the analysts’ and investors’ conference will therefore be further postponed. A new date will be announced in April,” it added.

It is the second time in a week that Air Berlin has postponed its annual earnings news conference, originally scheduled to have been held on March 19.

There has been much speculation about the future of loss-making Air Berlin as it seeks to push through a massive restructuring programme that includes the loss of 10 percent of its workforce, or 900 jobs.

According to the business weekly magazine Wirtschaftswoche, Abu Dhabi-based airline Etihad is seeking to increase its stake in the German carrier from around one third to 49.9 percent.

Aside from a small profit in 2012, Air Berlin has remained firmly in the red in recent years.