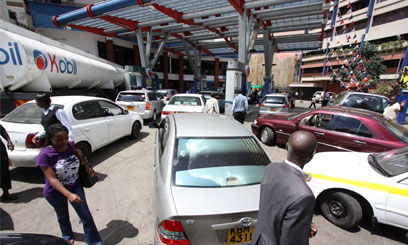 NAIROBI, Kenya, Jan 14 – The Energy Regulatory Commission (ERC) has announced an increase in the price of super petrol by Sh1.31, diesel by 21 cents and kerosene by Sh2 in its monthly review.

The commission says the increase in pump prices was attributed the average higher cost of imported products, despite a stable exchange rate in the month of December.

“In accordance with Legal Notice No. 196, The Energy (Petroleum Pricing) Regulations, 2010, ERC has calculated the maximum retail pump prices of petroleum products which will be in force from January 15 to February 15,” ERC acting Director General Dr Frederick Nyang said in a statement.

Motorists in Mombasa will continue to purchase the commodity at the lowest prices, with a litre of super petrol going for Sh107.23, diesel at Sh101.39 and kerosene Sh82.28.

Mandera motorists will continue to buy fuel at the highest price in comparison to other towns, where a litre of super petrol will sell at Sh124.40, Sh118.54 for diesel and kerosene going for Sh85.83.

“As always, the oil marketing companies are encouraged to compete below the maximum prices,” Dr Nyang said.