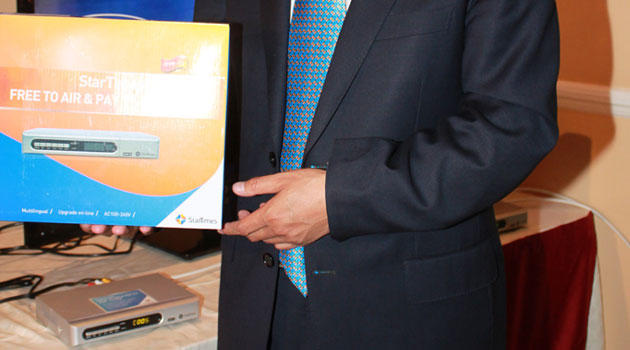 NAIROBI, Kenya, Oct 23 – The Communications Commission of Kenya (CCK) has launched a Sh70million digital migration public awareness campaign ahead of the December 13 deadline for analogue television switch off in Nairobi and its environs.

CCK Director General Francis Wangusi says the campaign is aimed at sensitizing Kenyans and especially Nairobi residents to buy set-top boxes and be able to receive the digital signal and avoid the last minute rush.

Wangusi says so far 550,000 households in Nairobi are already on digital TV platform and the commission is hoping to migrate close to 700,000 households by this December.

The three-month consumer education campaign will be delivered through electronic, print and digital media, as well as outdoor platforms.

“I need to state here that there will be no further extension of the switch off deadlines and I urge all players to support the exercise within the stipulated time,” Wangusi stressed.

CCK has already approved 45 different models of set top boxes which will range between Sh4,000 and Sh5,000 each.

Despite the limited time, there are only close to 300,000 set top boxes in stock but plans to import the rest are ongoing, according to the ICT Cabinet Secretary Fred Matiang’i, who officially launched the campaign.

It is envisaged that the switch off will later be done in Mombasa, Malindi, Nyeri, Meru, Kisumu, Webuye, Kisii, Nakuru, and Eldoret in March 30, 2014, and finally the rest of the regions in June 30 same year.

“Digital broadcasting is expected to cover at least 80 percent of the Kenyan population, bringing access to digital television and marking the end of the analogue transmission technology,” Matiang’i said.

“Let’s help ourselves and move forward. I know it’s a challenging transition but let’s be positive and also stop whining too much. I have never heard anyone complain about the cost TV sets,” the CS urged.

The change is poised to bring to the viewers picture clarity, sound access, availability of more channels and signal strength widening the reach of television services to all parts of the country.

Under the scheme, the country will receive more than 40 free to air high-definition channels.

The country’s digital signal was launched in December 2009 and has since seen the regulator set an ambitious target for the country to fully migrate by June 30, 2014, ahead of the July 17, 2015 global deadline.

The universal undertaking set by the International Telecommunication Union (ITU).