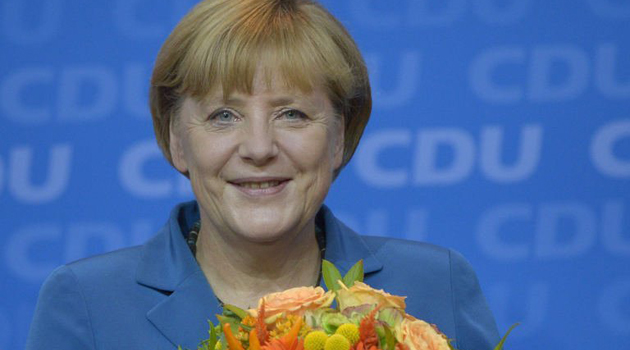 BRUSSELS, September 23 – More than ever undisputed commander of the EU ship after Sunday’s election triumph, Angela Merkel is now well positioned to face down calls for more economic flexibility and deeper political union.

The next months will be fraught with new bailout requests from Greece and possibly Portugal, looking increasingly likely. France and Italy continue to struggle against heavy debt and Spain still faces nightmare unemployment at 27 percent.

But in Paris the daily Le Figaro wrote Monday that hopes of more solidarity from a new German government would be dashed, with southern Europe facing “an Angela Merkel of imperial power … the world’s most powerful woman.”

And in Athens, where officials were quietly optimistic of seeing less austerity from the new German government, analyst Ilias Nikolakopoulos said “nothing will change German policy.”

For her third four-year term, the German chancellor dubbed Europe’s new “iron lady” is as unlikely to yield to anti-austerity calls in southern Europe as she is to satisfy British hopes of stripping Brussels of powers, or French hopes of more political integration.

“The triumph will increase her standing as a person, she will have more manoeuvring space,” Jan Techau, the director of Carnegie Europe, told AFP.

“But she won’t reverse course on austerity, there isn’t much political capital in Germany for that, even on the left, even amid the Greens.”

Whatever coalition Merkel forms, agreed the Brussels-based Open Europe think-tank, her resounding victory had put paid to any hopes of a major policy shift.

With part of that victory attributable to her cautious eurozone policy, the EU must expect “more of the same”, said its director Mats Persson.

Others, notably in Greece, rejoiced over the trouncing of Merkel’s former ally, the Free Democratic Party.

Italy’s former premier Mario Monti said the FDP “has often thrown up obstacles on European policy. If there is a grand coalition I hope to see steps towards European integration.”

But Merkel had never been a strong believer in more political union in Europe, said Carnegie’s Techau. “As long as she is in power she will not drive for more integration.”

That is likely to disappoint in France, where relations between Merkel and President Francois Hollande have been strained since the Socialist leader took office in May 2012.

Yet ties between the two power-houses are crucial to the 28-nation bloc and neglect is seen as harmful to the EU’s future.

Analysts likewise are sceptical that Merkel will live up to the expectations of British Prime Minister David Cameron.

Last month the German chancellor in a ground-breaking speech appeared to side with Cameron’s bid to repatriate powers from the European Commission in Brussels back to member states.

While Merkel is keen to provide breathing-space for Cameron, who is under pressure to take Britain out of the bloc, “she is not in the British camp,” said Techau. “She won’t go as far as the British would want in the repatriation of powers.”

And if she forms a grand coalition with her Social Democrat rivals, “the chances of the next German government offering any gifts to the British PM on social policy or other EU opt outs are small,” said Peter Wilding, who heads British Influence.

A grand coalition with the SPD could be more constructive on Europe.

“It could even be the case that the new government is (marginally) more constructive on Europe than before,” said UniCredit economist Andreas Rees.

“The continuation of euro friendly policies after the election will enable further much needed progress in European integration,” he said.