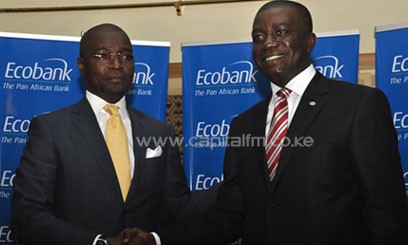 NAIROBI, Kenya, May 24 – Ecobank Group has announced the appointment of Ehouman Kassi as the new Managing Director for its Kenyan subsidiary Ecobank Kenya.

While introducing the new MD in Nairobi on Friday, the outgoing Managing Director Anthony Okpanachi said that he is positive that the new Director is equal to the task and will take the bank to greater heights.

“I am confident he will bring a lot of knowledge form the successes he has experienced in his previous positions,” he said.

Kassi has worked for Ecobank for almost two decades and has previously held a similar position in Cote d’Ivoire and Senegal.

Kassi in his acceptance speech said that retail client base and regional expansion will be his main focus.

“Regional expansion in East Africa is imminently important as the region’s economy is growing enormously, with new businesses being set up, it’s a key factor to our business,” he said.

Kassi said that he is keen to turn around the bank from last year’s Sh613 million losses experienced in Kenya.

Okpanachi who has served in the position for four years moves to the bank’s Nigeria affiliate, the largest in terms of number of branches and revenue contribution to the Group.

Kassi started off his stint at the bank as Credit Analyst and Relationship Manager at Ecobank Cote d’Ivoire, before rising through the ranks to become Deputy Head of the Corporate Banking Department, Cote d’Ivoire and later in Ghana as the Regional Investment Manager in charge of developing structured and corporate finance business in francophone countries in West and Central Africa.

He has since served Ecobank in several capacities including Managing Director, Ecobank Investment Corporation-Côte d’Ivoire and Director ; Regional Manager, Ecobank Development Corporation in charge of business development in francophone Africa between 2003 and 2005.

From 2006 to 2010 he was the Managing Director of Ecobank Senegal where in four years, Ecobank Senegal tripled its total Assets, branch network grew five times, number of clients 10 times, net profit tripled effectively positioning the Bank from the 9th position to the 3rd and 1st respectively in terms of total assets and return on equity in the market.

Before joining Ecobank Kenya, Kassi was the Group Head, Investment Banking ; Managing Director Ecobank Development Corporation. He holds a Masters in Finance from the University of Abidjan and University of Paris Val-de-Marne and has undergone an Executive Management Programme at INSEAD Singapore; INSEAD is one of the world’s largest and most prestigious graduate business schools.

He joins Ecobank at a time the parent company, Ecobank Transnational Incorporated, has injected an additional capital of Sh2.1 billion (USD 25 million) after the Group posted its strongest financial performance in its 25 years of operation.

In his double role as head of the bank’s East African cluster; he will be seeking to bolster its corporate and trade finance as well as its retail businesses in the region by riding the rising curve of intra-regional trade and the growing middle income consumer. The group has largely followed a bottom-up strategy to build its retail operations which has led it to build a vast network across Africa.

The steady capital flow from the group has powered the Kenyan subsidiary’s continued expansion of footprint pushing the branch network to the current 25 branches.

Last year, Ecobank opened a new branch in Karen and added one more in Nyali at the start of this year. In its last five years of operating in the Kenyan market, the bank has rolled out several savings products and offered its customers a wide menu of products to choose from.

The group has over 18,000 employees drawn from 36 different countries in over 1,200 branches. Ecobank is a full-service bank providing wholesale, retail, investment and transactional banking services to governments, financial institutions, multinationals, local companies, SMEs and individuals.