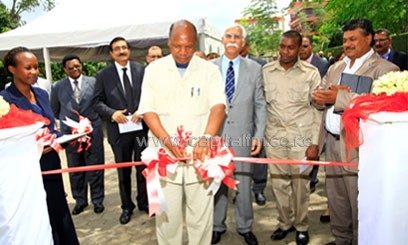 ARUSHA, Tanzania, May 11 – The Aga Khan University (AKU) has expanded its network even further following the launch of a new health facility in Arusha, Tanzania.

These include physician consultations, a wide range of diagnostic services including a CT scanner, ultra sound, a modern laboratory and pharmacy.
The Centre was established last year in June 2012 as a first step to AKU’s major presence in Arusha.

“This is a much needed service and a bench mark for high quality health care in the region,” Stanslaus Mageso Mulongo, the Regional Commissioner in Arusha said at the launch.

He further noted that AKU is planning to establish a hospital in its principal campus site that will provide quality service for specialised and critical care at internationals standards.

“The hospital will be a welcome facility that will enable the residents of Arusha and beyond access world class care, a much needed service in the region,” he said.

The launch also attended by senior government officials, diplomats, members of the East African secretariat, corporates, donors, prominent citizens and members of staff was presided over by Firoz Rasul, President of AKU.

The Regional Commissioner commended His Highness the Aga Khan, Chancellor of the Aga Khan University for his immense contribution to the development of education, healthcare, culture, infrastructure development, economic growth, and tourism not only in Arusha but in Tanzania, East Africa and beyond.

He applauded the University’s future plans to establish a principle campus in Arusha, boosting the city’s vision of being the regional hub for East Africa. He also noted that the substantial investment by Aga Khan University in Arusha will create new jobs, economic activity and educational opportunities and the Government is open to new investment to help develop the Arusha Region.

Rasul further said that the Arusha campus will be a new community with a vibrant educational center that will nurture the region’s future leadership.
The project will involve the development of academic and research facilities; student residences and amenities; a library; student centre and auditorium; sports facilities; a new hospital, a school as well as housing and amenities for faculty and staff.

The campus will house the Faculty of Arts and Sciences that will offer undergraduate and graduate studies in a merit-based and interdisciplinary educational programme tailored to the opportunities and challenges of contemporary East Africa. Graduate professional schools in Law; Media and Communications; Tourism and Leisure; Management; Government and Public Policy; Architecture & Human Settlement; and Economic Growth and Development will also be established.

Currently the Aga Khan University is working with the Regional and District Commissioners on a Regional Plan to improve the infrastructure of the Arusha Region, including roads, water management, community facilities, and public amenities. AKU is also cooperating with Nelson Mandela African Institute of Science and Technology to develop the Arusha region as a higher education hub for East Africa.

Emphasising on AKU’s long term commitment in the region, Rasul said that the University plans to invest over USD 1 billion towards establishing its campuses throughout the region adding more than 10,000 new jobs to the current 2000 already working for the Aga Khan University in East Africa.