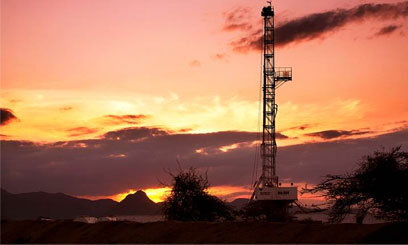 The well is about 30km west of Ngamia-1 well where Tullow struck oil earlier this year.

The statement said details of the find would be revealed in November by Tullow officials in partnership with Africa Oil Corp. Tullow has a 50 percent operated interest in the Twiga South-1 well with Africa Oil holding the remaining 50 percent interest.

“Drilling is ongoing and an announcement of the drilling result is expected in early to mid November after target depth has been achieved and necessary sampling and analysis has been completed,” the company said.

The results of the well had initially been expected by late October, but experienced delay which was attributed to minor mechanical problems on the drilling rig.

The Twiga South-1 structure is the second prospect to be tested as part of a multi-well drilling campaign in Kenya and Ethiopia and is the first discovery in block 13T following the Ngamia-1 discovery earlier this year in Block 10BB.

The new drilling is expected to continue to a total depth of 3,114 meters in the next 14 days and targets the same structural layers and reservoirs as the Ngamia-1 oil well. The company is also drilling another well, Paipai-1, which has a planned total depth of 4,112 metres, in northern Kenya’s Marsabit County on Block 10 A.

Tullow Oil has seven licensed blocks in Northern and Western Kenya which it operates together with Africa Oil.

The new development now increases hopes for Kenya to soon become a petroleum producer and exporter especially after the oil is found to be commercially viable.

To ensure that Kenya does not experience the ‘oil curse’ associated with most of the oil producing countries the economic analysts have said the Kenyan government will have to ensure transparency in how the extraction will be done and how the revenues will be utilised.

“I know Kenya has discovered oil, but the government should not at any time let it be the major driving sector of the economy. That is what clever countries have done,” Professor Banji Oyeyinka, United Nation Habitat Director in Nairobi, told Capital Business.