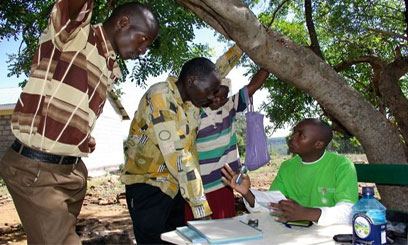 MPESA agent at the Beach/FILE

NAIROBI, Kenya, May 2 – Safaricom has launched a one-month MPESA promotion which will reward customers who top up their airtime through the money transfer service.

For every M-PESA top up made up to a cumulative maximum of Sh1,000 daily, customers will get a 10 percent bonus airtime. The promotion runs through the month of May.

“Despite the changing operating environment, our customers have remained consistently loyal to Safaricom and this loyalty has secured us a place at the helm of the communications industry in the region. This top-up bonus scheme therefore, is our way of showing our appreciation to our customers, whose support has positioned MPESA as the toast of the Kenyan and international business communities,” said Betty Mwangi, General Manager Financial Services.

Mwangi stated that the scheme is aimed at encouraging more customers to view MPESA as a more convenient alternative top up solution.

Last month, Safaricom announced an 80 percent reduction in the MPESA transactional value limit from Sh50 to Sh10. The company also reduced to Sh25 the popular band of transactions between Sh100 and Sh500 which accounts for more than 25 percent of all M-PESA deals. The move was aimed at increasing the number of Kenyans with access to affordable financial services; particularly those in the low income brackets.

“When MPESA was launched into the market five years ago, it was limited to mobile to mobile cash transfers. Today, M-PESA is an integrated financial service with a subscriber base of more than 15 million which offers customers affordable, secure and convenient financial services,” said Mwangi.

Early this year, Safaricom launched the fifth anniversary celebrations of the MPESA service; the company’s flagship brand. Since it was launched in 2007, MPESA has become the toast of business communities all over the world due to its phenomenal growth, innovativeness and its enabling capabilities.

It enjoys a pride of place as a case study for mobile money transfer and it has been replicated in many other markets including Tanzania and Afghanistan.

“As a Kenyan company, we are proud of the accolades that MPESA continues to bring to our country. Its success has served to position Kenya as a global trailblazer in mobile money transfer,” said Mwangi.

“MPESA enjoys great success largely due to its enabling capabilities which have resonated well with a majority of the populace. As a company therefore, we are continuously looking at introducing innovative new MPESA products which will further improve the lives of our customers,” she added.