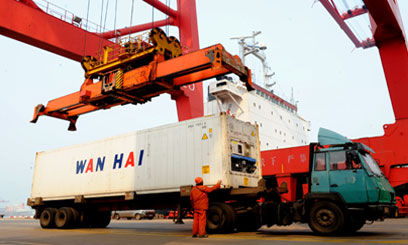 OTTAWA, Apr 5 – Canada’s international merchandise trade with China has more than tripled in the past decade, according to data released by Statistics Canada on Wednesday.

Meanwhile, Canada’s share of exports to the United States declined further from 74.9 percent in 2010 to 73.7 percent last year, although the total amount rose by 10.4 percent to 330.1 billion Canadian dollars. In 2002, the figure stood high at 87.1 percent.

With exports of 457.6 billion Canadian dollars and imports of 456.4 billion, Canada’s trade balance of the year went from a deficit of 9.0 billion in 2010 to a surplus of 1.2 billion, marking Canada’s first annual trade surplus since 2008. (One Canadian Dollar equals 1.0038 US dollars).