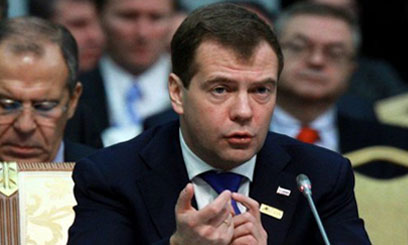 The Russian president did not mention any figures himself/FILE

BRUSSELS, Dec 15 – Russia said on Thursday it is “ready to invest” in an IMF-run eurozone rescue, as the EU told Moscow to run transparent March elections to replace President Dmitry Medvedev.

The outgoing Russian head of state spoke of rescue funding at the close of a two-day summit with European Union leaders that left the two sides split on energy deals and no closer on Western moves for more Syria sanctions or an oil embargo on Iran.

Referring to Russia’s IMF contributions quota, Medvedev said “we will abide by all the commitments. We are ready to invest all financial means to back the European economy and the eurozone.”

Medvedev spoke after his economic adviser Arkady Dvorkovich said Moscow was ready to contribute up to $20 billion (15 million euros) depending on progress towards a 200-billion-euro boost agreed by European Union leaders.

The EU has given participating states until Monday to work out the details of a series of bilateral loans to the International Monetary Fund that would then be channelled back towards efforts to stabilise the debt-laden eurozone.

The Russian president did not mention any figures himself, but added that Russia “is ready to look at and consider other measures of support” as well as IMF-controlled aid, currently being discussed by finance ministers from around the globe.

His adviser had said $10 billion due to be returned to Moscow by the IMF could be diverted towards eurozone aid upon the IMF’s request, and another $10 billion added as an optional contribution.

Medvedev said Russia wanted to see the EU “preserved as a powerful political and economic force” and the euro “preserved as one of the most important reserve currencies.”

Forty-one percent of Russia’s currency reserves are held in the euro, and half of all Russian external trade is also conducted with the EU, he added.

“What we need to do is make markets believe,” Dvorkovich said, adding that Brazil, China, India and South Africa, the other so-called ‘BRICS’ emerging giants, “will not object” to the IMF channelling money to the European Financial Stability Facility (EFSF).

The upcoming election to replace Medvedev has come under scrutiny following the allegations of fraud and protests that greeted Russian parliamentary elections earlier this month, including mass street protests at the weekend.

Prime Minister Vladimir Putin is expected to return to the presidency despite a reduced majority after these polls.

Medvedev announced in September that he will voluntarily cede the Kremlin to Putin in next year’s presidential election and then take the job of prime minister to complete a powerful job-swap.

He praised Russia for letting in 500 international election observers to the parliamentary polls, but “concerned at irregularities” reported by these observers, underlined that “we hope Russia will cooperate” again “to ensure the smooth monitoring of the presidential elections.”

Medvedev, who said he wants to see a realignment of presidential and state governor powers in the future, said the two sides had held “open” discussions on the conduct of these elections, but said the EU also had problems Moscow would like to see probed.

He said Russian-speaking minorities in some EU countries face discrimination, adding: “We cannot turn a blind eye to that.”

The EU and Russia remain far apart on a Trans-Caspian pipeline which Brussels is now negotiating with Azerbaijan and Turkmenistan, but the two sides took the first tentative steps towards a cherished Russian goal of visa-free travel in and out of the bloc.

On Friday, Russia will sign in Geneva its World Trade Organization accession, 18 years in the making, and Medvedev added that this development “could activate” an EU-Russia cooperation agreement long left on the starting blocks.