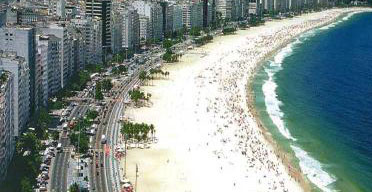 RIO DE JANEIRO, Nov 27 – One of the enduring images of Rio’s beaches — coconuts opened to yield their sweet water — is about to be a thing of the past under a new clean-up campaign by authorities.

The environment secretariat of the host city of the 2014 soccer World Cup and the 2016 Olympic Games has decreed that the big green fruit beloved by thirsty residents and tourists alike is an unhygienic eye-sore and its sale by vendors will be banned from December 1.

"Go on Ipanema beach at the end of the day and you’ll see a mountain of coconuts that people have left on the sand. What attracts rats most to the beach are coconut husks," the official in charge of the beaches, Jovanildo Savastano, told AFP.

Up to 30 tons of empty coconuts are recovered every day, he said.

Some environmentalists argue however that the fruit is biodegradable and presents no negative ecological impact. Its liquid is also excellent for health, they say.

Beachgoers with a craving for coconut juice will still be able to slake their thirst, but only by buying it in receptacles like bottles — or industrially made, in cans.

Rio de Janeiro’s mayor, Eduardo Paes, has offered to rethink the ban — but only if the thousands of people hitting the city’s beaches pick up after themselves.

Besides cleaning up Rio beaches, Brazilian President Luiz Inacio Lula da Silva vowed last month to ensure The Marvelous City is also free from violence during its hosting of the 2016 Olympic Games.